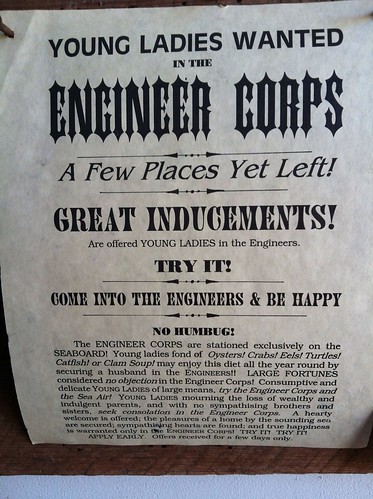 Spotted this at Fort Clinch on Amelia Island, FL. It was posted on a wall with a bunch of facsimile Civil War era documents. For a brief moment, I thought I'd slipped sideways into an alternate time line in which the Union Army recruited female engineers, until I actually read the whole thing.

Much as I'd like this to be an example of Civil War era humor, I think it must be a modern parody. I don't think that the sans-serif font used for "YOUNG LADIES WANTED" is period, not to mention that the use of at least 4 different typefaces at various sizes and weights smacks of something created using a computer, not hand-set type.

Still, it's nice to know that the folks in our national park service are having a bit of fun.